159 days ago, I turned in my classroom keys, signed away by school ID badge, and left teaching.

159 days of growth and change. And though I won’t get into the “why” details here, I must emphasize my reasons for leaving the classroom after 14 years had nothing to do with the students or the teaching.

Today, I took some time to go through a pile of letters from my kids over the most recent 5 years and reflect on what these beautiful minds taught me.

1) Everyone has a back story. Be kind.

I’m starting with the hardest one first — but hear me out.

It’s easy to dislike people. People suck. Especially in groups. (But keep in mind, you probably have sucked once or twice in your life to someone else, too.) And it’s even easier to find contempt for people you don’t know.

But EVERYONE has a story.

I’ve met kids from all walks of life. Some had already been incarcerated when I met them. Others are in prison now. I’ve been threatened within the inch of my life. I’ve been cursed at, spit at, and ignored. As I grew as a teacher I found my only play is respond with kindness and compassion.

Because everyone has a story. And when kids are angry or hurting, they respond in the way you’d expect them to respond – teeth clenched, ready to take you on. I can’t teach you the multiplicative inverse of π/4 if you’ve got something significant weighing on your mind. (I’ll get into specific stories in a bit.)

Teachers spend a considerable amount of time developing relationships, the actual “teaching” plays a minor role. You learn to love on the kids like they are your own, you give them a safe place, and you think about them when they’re out of your sight.

True story: I once let a girl shove me into a set of lockers to give my student enough time to run away from a fight.

I’ve only spent 159 days around adults so far this year so I am no expert in that field; however, I’ve found they respond surprisingly well to a smile. At times I’ve noticed kindness is not what folks expect, and it disarms their defensiveness. (Note: Manipulative people know this too, which makes it hard for the most cynical of cynics to trust kindness. But be kind anyway.) 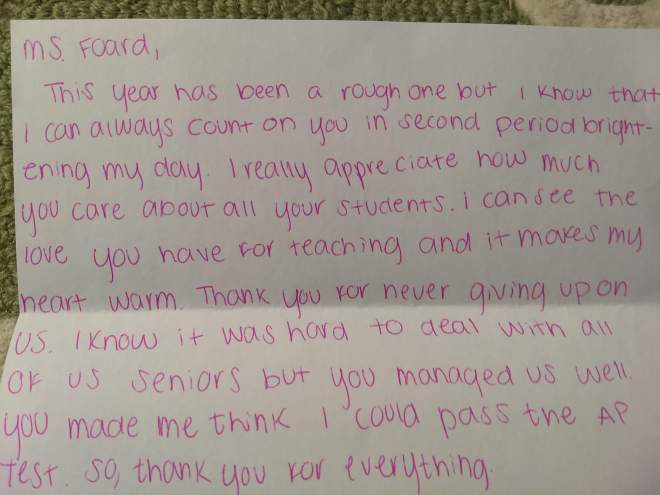 If the first thing I learned is everyone has a story, then the second thing I discovered is to listen to those stories – some unfold like an epic narrative, while others are short and comical.

But every individual has a unique perspective, a different life experience from you. They may have just walked down a road you don’t realize you’ll be on next week. Maybe they DO know something you don’t?

Over the past 159 days, I’ve met so many beautiful people and listened to their stories. Instead of relearning the business world by taking another business class, I met with friends and strangers, asking them questions about themselves and their day-to-day jobs.  Surprisingly, where I have ended up in my job has everything to do with the conversations I had along the way.

I learned how to listen from my students. Often they would come to me to externally process some high school situation. Other times, though, they needed a confidant. Every interaction has grown my knowledge in some positive way. Listening to students taught me how to deal with serious situations and how to connect someone else’s experiences to my own. Listening grew my empathy. And even negative interactions will develop your character if you allow yourself to grow from the challenge.

3) People want someone to believe in them.

I’ll never forget a particular student in my Geometry class from a couple years ago. He was behind in school, on probation, no parental support, and on the edge of getting expelled. I noticed he didn’t struggle in math, his struggle was with life. And deep down, this wasn’t the life he wanted. Following lesson #1, I gave him a little room to decompress when he’d had a rough day. I left him alone when he was angry (except, when no one was looking, I’d give him a nod). I praised his work, I let him challenge me, and when I eventually gained his trust, I challenged him back. During my planning period he took to stopping by room just to chat — he liked to drop some F-bombs just to see what I would do, other times he’d sit down and vent, but mostly just tell me how much he wanted to graduate.

He just wanted someone to listen.

I gave him more chances than most to make up tests so he could pass the class. I did. I totally broke the rules right there – and I don’t regret it. Because I believed in him. Again, it was his daily life, not his intelligence, keeping his grades low.

But one day, as I watched from the window, he left school, got on his motorcycle, and took off. The administrator there told me the student had just DROPPED OUT. “He’ll probably be dead in ten years,” the admin scoffed. (WTF.)

Fast forward a year and a half later: This student walked across the stage at graduation. He’d come back, made up all his classes, and graduated with his class on time. Luckily, I wasn’t the only person who’d believed in him and someone else led him through the finish line. I cried ugly tears on that graduation day, May 2018.

For those in the back: ABOVE ALL ELSE, it’s about the relationships

Ask any teacher worth their salt and they will echo my sentiment. This job is NOT about test scores – these kids are not data points. This job is not about winning sporting or academic events. Teaching is about forming bonds and making connections.

Over my 14-year tenure, I not only taught in a classroom, I also coached girls’ cross-country in my early years, then the academic bowl team. I spent the last 5 years I advising the senior class.

One day, I may no longer have a job, a house, a Twitter following. I’m sure I’ll be fine. But if I am not surrounded by the people I love, I have failed those people. I refuse to allow myself to be measured by my job title or social standing. Instead I prefer to leave a legacy built on the relationships I’ve forged and inspired by the people who have influenced me. 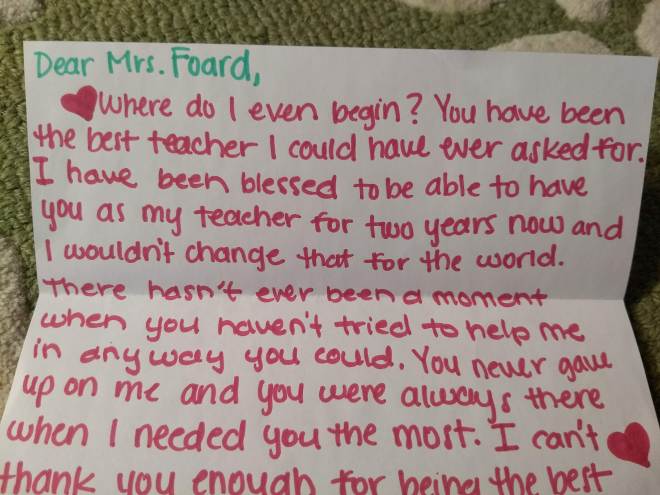 This one I’m still learning.

Nothing ever goes as planned in teaching. You’ve got to be flexible, stay on the ball. Whatever magic dance you dance the night before a high-stakes test never seems to yield the results the lawmakers/shareholders/naysayers want. And because the “squeaky wheel gets the grease,” those of us with the pedal to the metal are offered no encouragement from above. It’s disheartening to only hear negative from the adults in the room.

To top it off, I would leave work every day feeling guilty because I felt I hadn’t done enough for my students, and feeling even more guilt that I hadn’t yet picked my own children up from school.

But then the kids… The kids would walk in my classroom, tell me their stories of the day. If I had been absent, they asked where I’d been. They’d write me letters year in and year out. The kids. The kids encourage ME. The kids teach me I should go easy on myself.

159 days away from the classroom. As I said, this one I’m still learning. I’m only human. 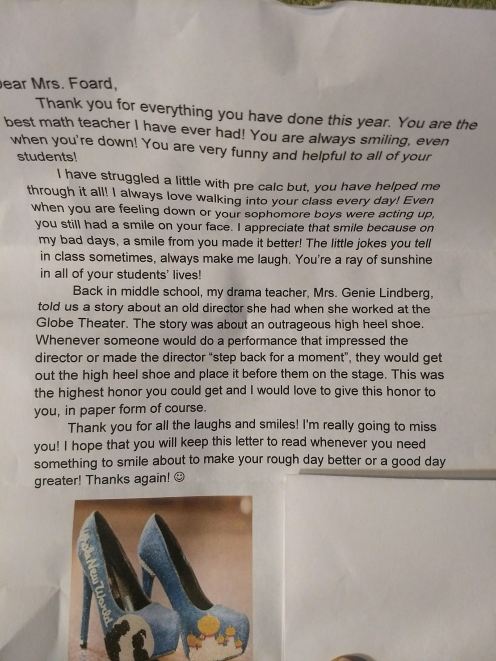